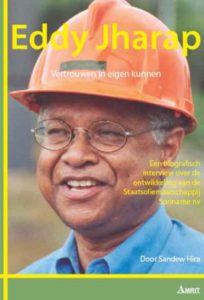 The name of Eddy Jharap is closely associated with the Surinamese company Staatsolie. A modern industrial company which has become one of the largest companies in Suriname within 25 years with a significant contribution to the economy and the government. With sales of US $ 270 million (2006), a pre-tax profit of $ 165 million and more than 650 people in staff, Staatsolie is an important pillar of the Surinamese economy and society. Staatsolie therefore exceeds expectations often associated with inefficient, subsidized state-owned enterprises in many developing countries. Remarkable about this performance is that the company is led by Surinamese managers and is founded on local knowledge and know-how.

The story of Jharap is closely related to the modern history of Suriname; a poor farmer boy who knows how to work his way out from the colonial society through study, hard work, discipline and an entrepreneurial mindset. While studying in the Netherlands, he became active in the anti-colonialist movement and after returning in Suriname he co-founded the left-wing People’s Party. After the military coup in 1980, he focused on the development of the petroleum potential in Suriname. The goal was to offer Suriname full advantage of its own natural resources. Despite the difficulties and low expectations he manages to create a company that is now seen as the national pride of the Surinamese economy. His commitment and meaning became really evident when in 1998 the government Wijdenbosch wanted to sell the Surinamese oil resources abroad to raid the treasury and fired Jharap as director to reach this goal. It led to mass protests and the resignation of the government. Jharap regained his position.

In this book Jharap shares his story with economist and historian Sandew Hira. His life, study, political and trade union experiences as well as his management skills are discussed extensively. The historical changes in Suriname are seen through the eyes of a descendant of a ‘kantraki’ who managed to develop into a successful manager. This book is only available in Dutch.