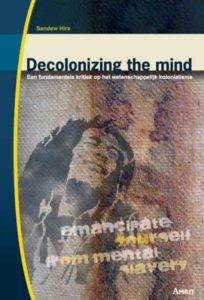 This book consists of three parts. The first part provides a fundamental critique on the theses of the scientific colonialism. The second part analyzes the mechanisms by which this movement maintains its dominance in the Dutch academic world. The final part discusses some strategic issues for policy makers of organizations active in the field of Decolonizing the mind. This book is only available in Dutch.