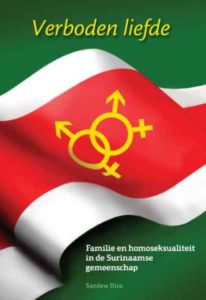 “Why has Allah punished me?” Mother Jokhoe cried out when her son told her that he was attracted to men. She didn’t even know what homosexuality was. Much later, when she talks to writer Sandew Hira about her first reaction, she keeps saying: “My son is gay and he’s this”, while she gives a firm thumbs up. Mrs. E. S. Jokhoe-Bodha is one of the tens of thousands of mothers in the Surinamese community who have had to ask themselves a question at some point in their lives: What do I love more, my culture or my child? And culture represents a broad mix of ideas, values, beliefs handed down from generation to generation. And in that culture love of men for men and of women for women is a forbidden love.

This book is about how heterosexuals in the Surinamese community deal with homosexuality. These heterosexuals are the parents, children, relatives and friends of Surinamese gays and lesbians. Based on interviews with Surinamese gay, lesbian and heterosexuals, Sandew Hira constructs a picture of the complex emotions that come up when it appears that a father, mother, son, daughter, brother, sister or friend comes out for his/her homosexual orientation. The process of rejection, tolerance and acceptance is shown  and expressed in moving stories that demonstrate how a community changes as forbidden loves open up and blossom. This book is only available in Dutch.